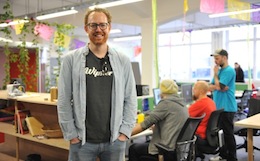 Video Easy
Wipster is a video review and approval platform designed for producers, content creators and media teams. Teams no longer need to use email, Vimeo, storage, encoding, delivery and archiving tools. Wipster replaces all of these in one tidy, streamlined package, removing the hassle of previous workflows and furthering creative progress.

Wipster completed the Lightning Lab Business Accelerator program in May, 2013, launched a Beta product into the New Zealand marketplace in October 2013 and continuously updated the product to successfully come out of Beta in March 2014.

Wipster is a young company that’s moving at speed, says founder . “That means there’s a lot of freedom to experiment and innovate, and not all the rules are written yet, so each team member gets to play a part in making them. Working here means you work hard, fast and cleverly to keep the company scaling at speed.”

+ Text Size -
Do NOT follow this link or you will be banned from the site! Original generation time 2.0454 seconds. Cache Loaded in: 0.0189 seconds.